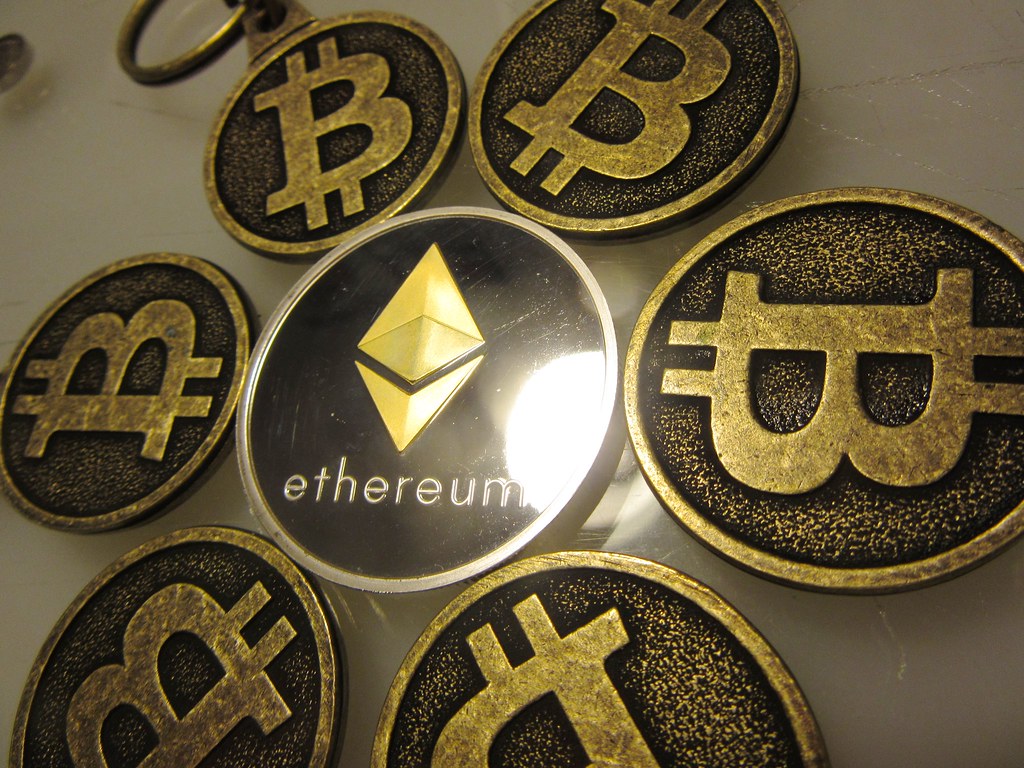 Bitcoin and Ethereum represent the two largest cryptocurrencies by market cap, and probably, also by popularity. While Bitcoin was gaining attention for its ballooning price, Ethereum was making headlines with advancements in smart contract technology. These two cryptocurrencies share many similarities, but equally, a number of differences. Traders, investors, and users of digital cryptographic currencies are almost certainly to be involved in either Bitcoin or Ethereum trades, and this guide will explain all you need to know about them.

The Features of Bitcoin Explained

Bitcoin was the very first cryptocurrency, created by Satoshi Nakamoto and formally launched in 2009. Unlike traditional, fiat currencies, such as EUR and USD, Bitcoin is a distributed peer-to-peer digital currency which exists within a Blockchain. This cryptocurrency was hailed as a revolution, since it allowed cross border payments between any two parties which were faster and cheaper, and did not involve any intermediary.

Along with the invention of Bitcoin, the mysterious Nakamoto generated great interest in its underlying technology, Blockchain. This decentralised network is under no central authority and uses miners to verify transactions and build new blocks. Whenever a transaction is verified it is updated on the Blockchain, which means that it is updated on all participating nodes or computers.

Within this single public ledger, you can search all the past transactions of Bitcoin, including the creation of the Genesis block, the very first Bitcoin block. Once a new block has been added it can never be erased or modified directly. Any modifications are made in subsequent blocks. This level of transparency is unheard of in the traditional currency sector.

Over time, hard forks can take place, creating a new Blockchain. Bitcoin has seen numerous such events take place, with the most significant being the Bitcoin Cash fork.

The Features of Ethereum Explained

While Bitcoin is primarily considered to be a payment tool, Ethereum’s reputation is based on its smart contract capabilities. These are, in essence, computer codes which confirm whether one or more conditions have been met and automatically execute a result, such as a payment. Smart contracts have numerous advantages over traditional agreements, such as being cheaper, more efficient and extremely accurate.

Ethereum itself is not actually a cryptocurrency, even though many people commonly refer to it as such. In fact, the cryptocurrency is called Ether, and Ethereum is the name given to the decentralised platform which runs the smart contracts. Nevertheless, when you look to buy Ether you will most likely see it listed as Ethereum or ETH.

Ethereum launched in 2015 and is today the largest open-ended decentralised software platform. It is popular amongst developers as it facilitates the creation of Distributed Applications (DAPPs) along with smart contracts. Like Bitcoin, Ethereum underwent a significant split. Confusingly, the new Blockchain kept the original name, whereas the original platform changed names to Ethereum Classic.

The core development team behind Ethereum are well-known individuals, unlike the mysterious Satoshi Nakamoto, who might be a man, a woman or an entire organisation.

The Differences Between Bitcoin and Ethereum

Bitcoin and Ethereum have numerous differences in the way they exist and operate, as well as their ultimate ambitions. Today, you can buy goods and services online using Bitcoin, and you can develop and run smart contracts using Ethereum. Here are some of the primary differences between the two:

One of the key considerations in the Bitcoin vs Ethereum debate refers to mining. Both cryptocurrencies exist within their respective Blockchains, so both require miners to keep the infrastructure safe and updated. The primary distinguishing element of the two is their consensus algorithms, which are used to verify the validity of the data being updated on the ledgers.

Since its inception, Bitcoin has operated using the Proof of Work algorithm. Using this system, the probability of successfully mining a block is directly linked to the computational power used. Since only the miner or pool of miners who successfully mine a new block are rewarded, this probability is significant to anyone investing in Bitcoin mining hardware. Proof of Work encourages competition, but also excludes, for the most part, those who cannot provide powerful computers.

Although Ethereum followed a similar consensus algorithm, it has now migrated to Proof of Stake. Using this algorithm, the probability of successfully mining a block is directly linked to the size of a miner’s or mining pool’s stake. Block validators don’t receive a block reward. Instead, they get paid network fees which, in Ethereum’s case, is called gas.

If you are looking to invest in Bitcoin or Ether, one of the most significant factors is pricing. The BTC vs ETH price charts have provided analysts with plenty to talk about over the years, but at the moment Bitcoin remains the undisputed winner of the cryptocurrency wars.

One of the primary reasons for this is simply down to being first on the market. The six-year difference between the two cryptocurrencies has allowed Bitcoin to grow in popularity and become the currency which most people associate with the industry. In addition, Bitcoin’s rise in price to around $20,000 attracted worldwide media coverage, giving the cryptocurrency an unrivalled promotional campaign. At around the same time, Ethereum’s price peaked at just over $1,400.

The following year, 2018, brought the price of both cryptocurrencies smashing down. Bitcoin’s price dropped 70% from its all-time high, while Ether’s price dove down 90%. For a period of time, Ethereum even lost its ranking as second-largest cryptocurrency to XRP, however, it has since retaken its second placing.

Should You Invest in Bitcoin or Ethereum?

There are many reasons to invest in either Bitcoin, Ethereum or both. Depending on your reason for investment, there are several options available to you.

The majority of those looking to speculate on either cryptocurrency prefer an alternative to actually buying the digital asset. Today, several cryptocurrency-based financial instruments exist, allowing you to profit from correctly predicting the future price of Bitcoin and Ethereum. The most popular amongst these instruments are Contracts for Difference (CFDs).

You can use platforms to buy both the asset or the contract, and you can use several convenient payment methods to fund your account. Apart from offering you a demo account to start off, many wallets allow you to use its social trading platform which gives you the option to emulate other trader’s trades.