Ledger Nano X is the latest hardware wallet offered by Ledger, a company which specialises in secure cold storage devices. Designed to be the most secure and mobile-friendly hardware wallet in the crypto world, the Nano X is equipped with the latest and most advanced security features. Even before it was officially launched, the device got the attention of the entire crypto community by being presented with the prestigious CES Innovation Honoree Award.

Similarly to its predecessor, the Ledger Nano S, the Ledger Nano X has a screen that is used to display all the information regarding your transactions. By using the display in conjunction with just two buttons, you are able to manage and oversee all of the wallet’s operations.

The Ledger Nano X uses a highly secure chip built using the latest technology. As a result, it is almost impossible for hackers to steal coins from this hardware wallet. The device will seamlessly work with both mobile and PC versions of the Ledger Live companion app.

The Ledger Nano X hardware wallet is priced at €119, including VAT and shipping. 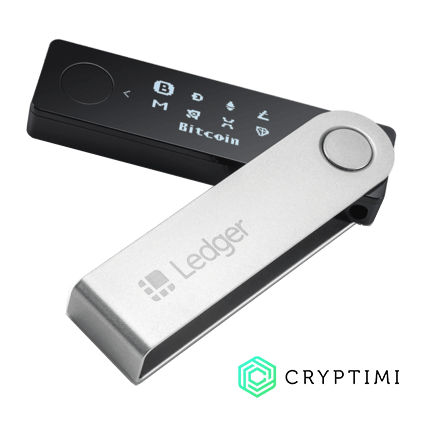 The visual appearance and features of Nano X look pretty much the same as those of the Nano S. The most striking feature of Nano X is its Bluetooth connectivity which makes the wallet more user-friendly, accessible, and mobile. Once you pair the Ledger Nano X using Bluetooth with your iPhone or Android, you will be able to check your balance, send & receive assets, install apps and add accounts. You can do all this with just a few taps on your smartphone.

First, you need to download and install the Ledger Live mobile app. Similar to the other Ledger products, the final authentication for your transaction must come from your Nano X.

It is worth mentioning that for those users who don’t trust Bluetooth, Ledger has provided an option to disable it from the Control Center. If you decide to disable this feature, you can connect your device to a computer with a USB cable.

The Nano X comes with its own, built-in rechargeable battery, which is very convenient and makes the devices truly portable. Users who opt to use the Bluetooth connection have no more reason to carry the USB cable anymore. Ledger Nano X owners don’t even need a Wi-Fi connection as they can make use of the mobile’s 3, 4 or 5G internet connection to make secure transactions on the go.

The Nano X is designed to store up to 100 applications simultaneously thanks to its increased storage size. This feature is very handy for users who would like to store hundreds of assets on a single device, allowing them to immediately access all assets in a few taps. 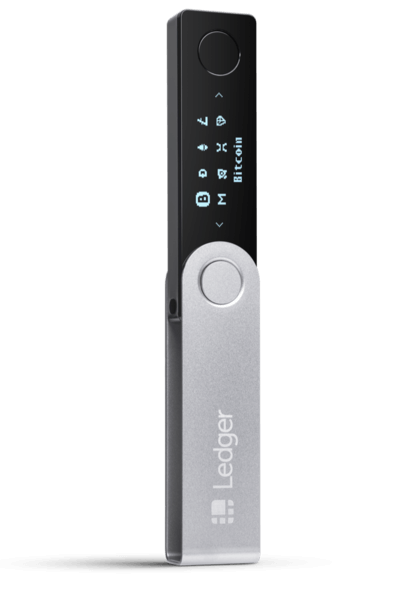 Is Ledger Nano X an alternative for the Nano S?

The short answer is no! Ledger has clearly stated that it will continue its support for Ledger Nano S as both models have their own separate features. The Nano X can be used to manage your crypto assets on the go while the Nano S can be used as a backup which can be kept in your home in a safe vault or storage. Due to its competitive price, the Nano S will remain the popular choice for novice traders whereas the Nano X is ideal for professional or serial traders who want to manage their digital assets anytime & anywhere.

Hence, the Nano X can be dubbed “A Bluetooth enabled Nano S on the go”

The good news for those who already own the Nano S is that they can easily transfer their assets to the Ledger Nano X using the Ledger Live companion app.

Ledger Nano X has two types of connectivity: Bluetooth and USB. The wallet can be connected to any 64-bit desktop or laptop computer (via USB) running Windows(8+), Linux(10.8) or MacOS. Additionally, users can connect the device to an Android phone (supports Android 5 Lollipop or later) or iPhone (iOS 9 or later) using Bluetooth.

When you receive the package from the manufacturer, make sure the box contains the following:

Before using the Ledger Nano X for the first time you must carry out three important tasks: 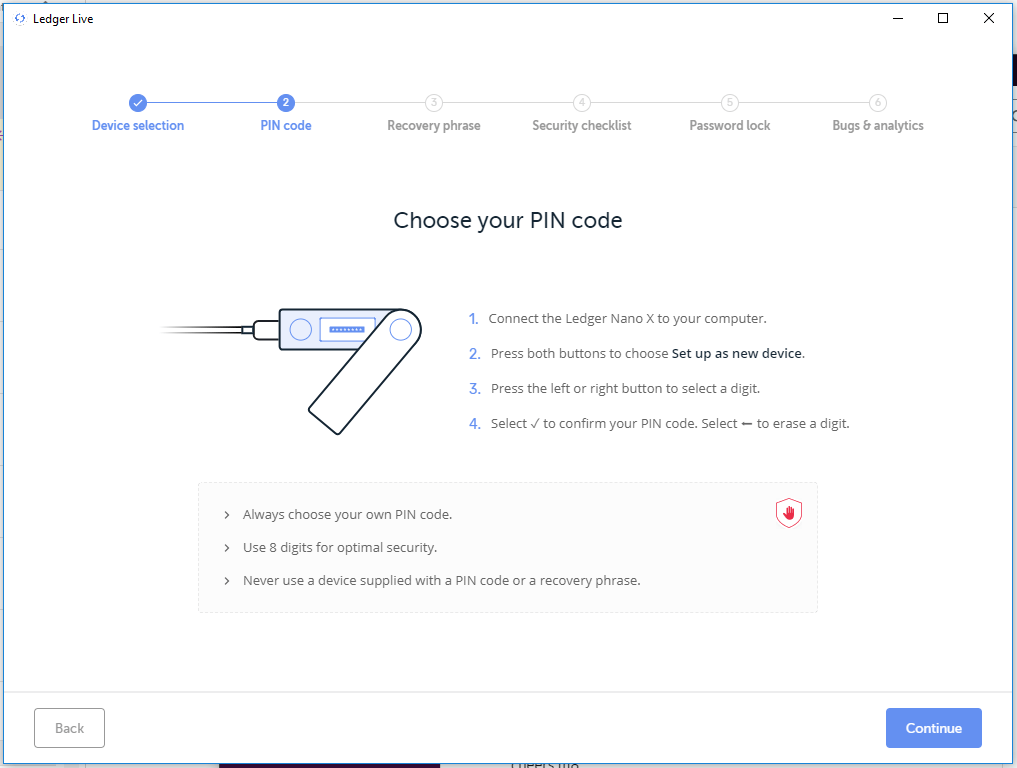 Once you set up and confirm your 24-word seed, all that is left is to keep your device connected, head over to Ledger Live app and download the apps such as Bitcoin, Ethereum, Bitcoin Cash etc. 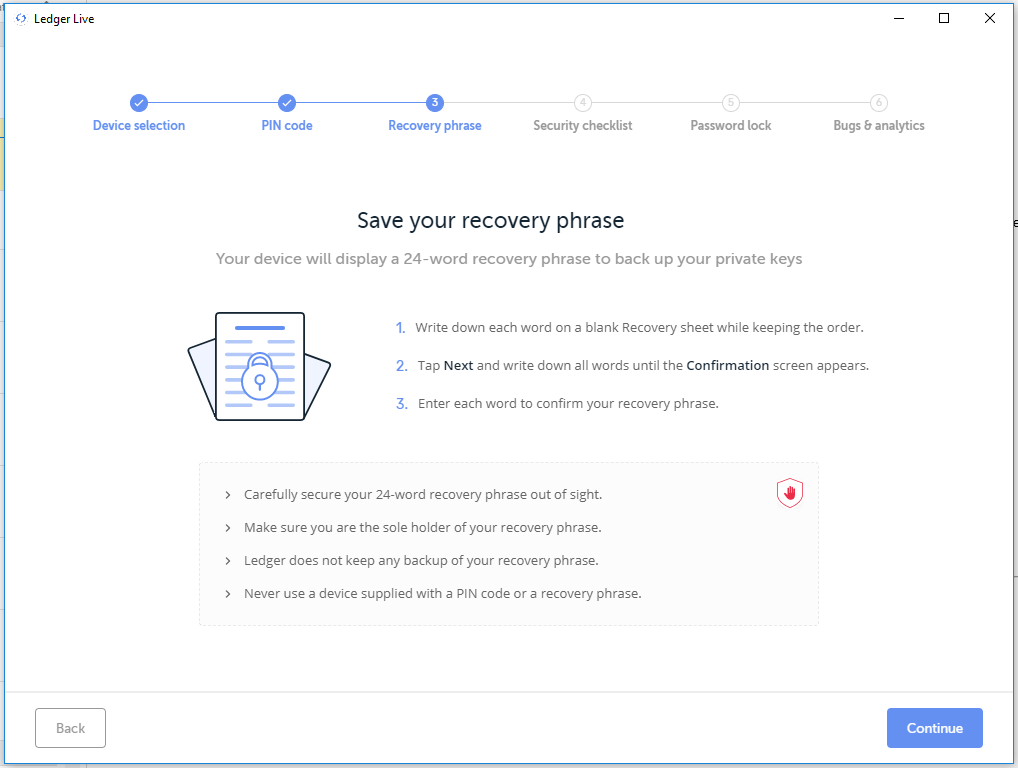 Once you’ve downloaded the desired apps to your Ledger X, you can start sending and withdrawing funds to and from your new and secured device.

In order to send & receive crypto assets using Ledger Nano X, you first need to install the Ledger Live software on your computer or smartphone.

Ledger Live mobile can be downloaded from Google Play Store (Android) and iTunes for iOS.

To send or receive crypto assets, users must download the relevant cryptocurrency app from Ledger Live.

The below procedure will help you download the Bitcoin (BTC) app to send and receive the cryptocurrency. You can use the same procedure in order to transfer any other supported digital currency.

The app should install within a few seconds.

Assuming that you have already installed the Ledger Live mobile app and the crypto asset apps, adding an account involves the following steps:

Follow the below steps to send a crypto asset from your Ledger Nano X. Naturally, you can only send digital assets which you have stored within your device. To send an asset, all you need to do is:

Follow the below steps to receive cryptocurrencies on Ledger Nano X:

Once the sender completes the transaction, coins will be received on your wallet.

Ledger has stated that the Bluetooth technology will not cause any kind of security threat to the crypto assets, as the Bluetooth connection is protected with end-to-end encryption. Additionally, the users’ private keys are more secure on the Nano X hardware wallet, as it uses the same security element (CC EAL5+ certification) which is widely used in secure applications, like credit cards, to protect the user’s data and privacy. Even if your smartphone is compromised, your private keys will never leave your device.

For those users who would like to stick with USB connectivity, Ledger has provided an option to disable Bluetooth from the Control Center.

Users who own the latest iPhone models like iPhone X, may further protect their assets by enabling Touch or Face ID to open the Ledger Live app. Those who own Android smartphones should be able to lock the Ledger Live app with Touch ID provided their phone has a fingerprint sensor. 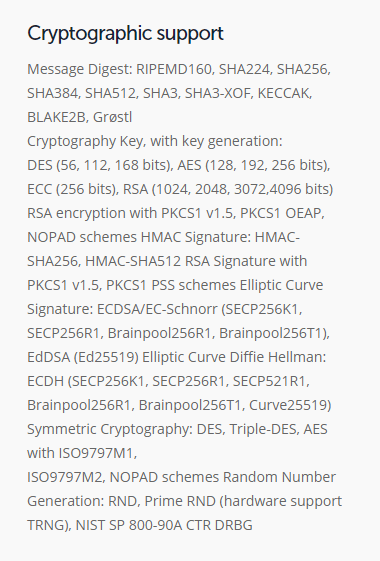 Ledger Nano X allows you to recover your wallet using the recovery phrase. This is especially important should you forget your login PIN or if the device is stolen or broken. Without the recovery phrase, it is not possible to restore your wallet. You may also use this procedure in order to transfer your assets from your Nano S to your Nano X. 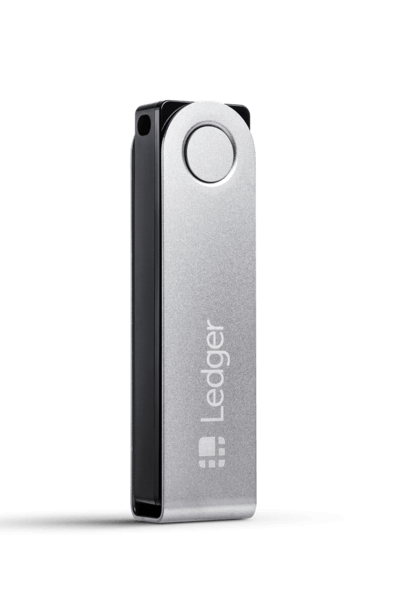 A direct comparison of the Nano X vs Nano S: 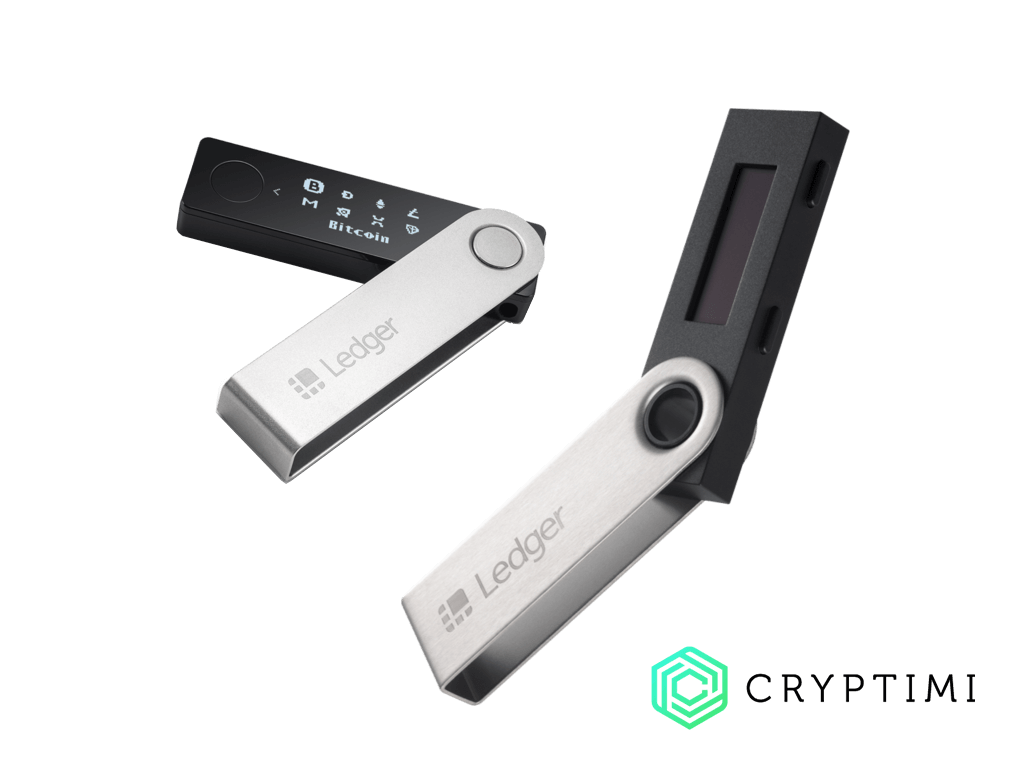 Update: The Genises Block Nano X is no longer available, however, you may now buy the official Nano X and benefit from Free Shipping worldwide!

Which one you should buy? Nano X or Nano S?

Since the core functionality of both wallets remains the same, the choice depends primarily on your expected device usage. For serious investors who will be trading frequently, the Ledger Nano X will be the best buy. Why? Because it allows you to manage your digital assets anywhere, anytime, without a computer and without a USB cable.

For hodlers, the Ledger Nano S will do just fine to protect your coins and tokens. It is priced at almost half the value of Nano X so it will also save you some money.

If you’re buying your first hard wallet, we recommend you to go with the Nano X. Its technology is faster, it allows you to store more coins and it will remain compatible for a longer period of time.

Trusted by both novice and professional traders to secure their digital assets, Ledger Nano S is the most popular and secure hardware wallet.

Launched back in 2015, now run by the ShapeShift exchange, the KeepKey Wallet is one of the oldest and most secure hardware wallets.