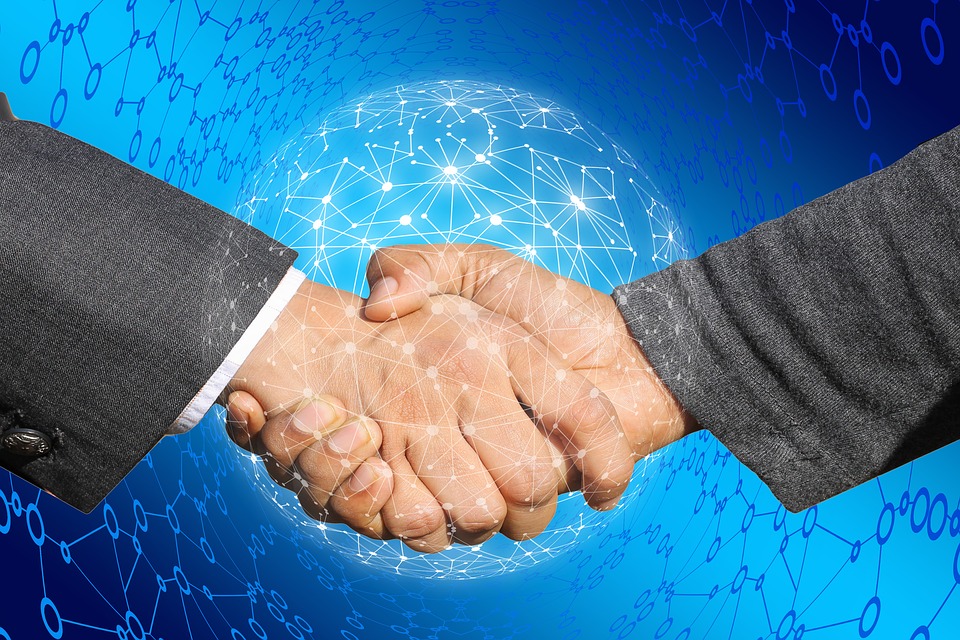 Cryptocurrency and blockchain technologies have the potential to revolutionise the world. Many believe that through the use of these decentralised networks the world will undergo a shift, comparable to the introduction of the Internet. Different cryptocurrencies represent different blockchains, each with their own protocols and purposes. Each one promises to improve the way a particular process, such as a payment or a validation takes place.

Ethereum, one of the largest cryptocurrencies by market cap, second only to Bitcoin, has built its reputation on facilitating the creation and execution of Smart Contracts.

What are Smart Contracts?

This computer code or algorithm includes one or more rules and objectives which the involved parties agree to. Once these objectives have been reached in accordance with the rules, the smart contract automatically executes itself and provides a result, such as a payment. In this way, a smart contract replaces the need for a middle person, such a notary or lawyer, who is normally there as a person of trust for all those involved.

An important factor of any smart contract is that it is created in such a way as to ensure the automatic execution once objectives have been reached. No one can influence the contract to either delay execution or to execute without the agreed conditions being met. This ensures that there is no fraud between parties, while also reducing costs and delays.

How do Smart Contracts Work?

The best way to understand how a smart contract works is to use a practical example. For centuries, people have been buying and selling houses to one another, using established processes and professionals. Oftentimes, escrow services are used as independent intermediaries that withhold the buyer’s funds until the deal is completed. For their service, these professionals charge a significant percentage of the funds being stored.

Smart contracts replace the need for escrow service providers. If the seller fulfils his side of the agreement, such as providing the necessary ownership documents and signed sale agreement, the smart contract will automatically transfer the buyer’s funds into the seller’s account. Concurrently, the buyer will receive the signed documents along with anything else which was agreed upon in the smart contract. No escrow services are required, and the service time of other professionals, such as lawyers, is greatly reduced.

Before a smart contract has executed its purpose, both the buyer and the seller can view the documents in a decentralised blockchain. This eliminates the possibility of fraud and reassures both parties that the deal is genuine. If required, the estate agent or lawyers can include their own requirements in the contract, so that they do receive payment or documentation upon the execution of the contract.

Do Smart Contracts Add Value to Our Daily Lives?

The whole purpose of a revolution is to improve the lives of those affected by it. Smart contracts have the potential to add value to our daily lives by simplifying tedious processes which create stress and distrust. Smart contracts are faster and cheaper to use than any alternatives which exist today. They provide an optimum balance of security and functionality for any goods or services being traded, or otherwise agreed upon.

As the use and versatility of smart contracts become apparent, more individuals and institutions are set to implement them. Whilst the process to set up a smart contract is still cumbersome for non-technical individuals, this will certainly change as Ethereum and other smart contract blockchains develop their infrastructure for the masses.

Transparency is one of the cornerstones upon which Satoshi Nakamoto built the first cryptocurrency. Instead of creating suspicion by withholding any information, smart contracts are available for all involved parties to scrutinise and agree on, before being implemented. Once set in motion, a smart contract cannot be amended by any party. Both parties can be confident that if they fulfil their side of the agreement they will receive the agreed result.

Any trade or agreement which involves documentation would normally take days or weeks to implement until different professionals go through the documents and give their approval. Several delays can occur as documents are passed from one intermediary to another, and it is not uncommon that they remain unread and forgotten for days.

Smart contracts are powered by computing power, not people, so they are able to go through volumes of documents in a fraction of the time it would take a person to do. Through the availability of high-speed Internet, smart contracts can shave off days or even weeks from the time taken to process a transaction, such as the sale of property or a service agreement.

In addition, smart contract’s ‘set it and forget it’ feature means that no third parties need to monitor it, amend it or otherwise be involved in its internal processes. This makes smart contracts highly time-efficient.

For its speed in execution, a smart contract is also highly precise. Computer codes which have been programmed correctly, providing a level of detail which removes ambiguity and misinterpretation, will carry out instructions with virtually no possibility of error. A smart contract’s level of precision is dependent on it having been programmed correctly by a human. Beyond this point, there is no risk that a computer code makes errors or omissions as a human might do.

In order to keep smart contracts safe, it is recommended that programmers use automated coding features. These are the safest option to encrypt data and protect it from unauthorised interference. Protected by the blockchain within which they exist, smart contracts operate in a highly secure environment.

All the data which forms part of the smart contract is visible and accessible by any member of the agreement. Furthermore, this data is also stored on the blockchain for future records, making it impossible to erase. This ensures that any disagreements on the terms of the contract, even years after its execution, can still be clarified by accessing the relevant block within the blockchain. This feature can be particularly useful for extended legal battles.

Overall, smart contracts can provide substantial savings to whoever uses them, but more so for professionals, such as service providers, which utilise agreements often. Smart contracts are able to remove most middle persons, which, together with their precision and efficiency, result in substantial cost savings for all parties involved.

There are several potential uses for smart contracts in our everyday life. While some revolve around the sale of goods or services, others relate to the roles of the community and other facets of society.

Making a claim with an insurance is a lengthy, bureaucratic and time-consuming exercise. Outdated administrative practices present in most insurance agencies ensure that claims are expensive and inefficient. The introduction of smart contracts can greatly improve the claims process by offering a simple and streamlined list of requirements which the client must adhere to in order to instantly receive payment (or instantly provide approval of the claim).

Internet of Things (IoT) technology connects digital devices around you in order to provide you with a superior quality of life. As a simple example, as you are approaching your home your mobile phone can transmit a message to your home to turn on the lights and start the kettle. Smart contracts can, for example, help you realise when your package or mail is incorrectly delivered to someone else and can alert those responsible to rectify the situation.

This can happen without you ever checking up on your order, since the smart contract would realise that a rule, in this case delivering to your address, has been breached.

While generally both employers and employees abide by their employment contract, it is not uncommon to hear about cases of breach of contract. Either party could, potentially, breach the agreement, but smart contracts can help avoid this conflict. They can include all the conditions of employment, including working hours, objectives, and salary, and each party would be responsible for keeping up their end of the deal.

Smart contracts can play an even bigger role in contracts involving temporary labour since these contracts normally involve the temp, the employer and the agency. Through the use of smart contracts, the temp won’t need to worry whether the employer or agency will pay on time and according to the agreement.

Elections take place across the world, to elect new governments, mayors or even board members in a sports club. The larger the election, the more inefficient the process, and this results in higher costs and slower results. By using smart contracts linked to a blockchain where all those with the right to vote are registered, elections can take place virtually, at a fraction of the cost.

Blockchain technology will ensure that only those who can vote actually do and that only one vote is cast per person. Each vote is automatically and instantly verified so that by closing time the result can be immediately produced.

The future of smart contracts is full of exciting potential since they can be implemented by anyone, for practically anything. In the same way that technology has revolutionised the way, we book hotels, travel and order takeaway, smart contracts are working on revolutionising agreements. They eliminate costly intermediaries whilst improving trust and security, all in an efficient and precise manner.

Some work still needs to be done before smart contracts are commonly used. A generation of competent programmers needs to acquire the skills necessary to ensure that smart contracts are correctly defined and free from misinterpretation. However, the time for smart contracts is close, and with the progress made in Artificial Intelligence (AI) and other spheres of technology, it is likely that they will become commonplace by 2030.