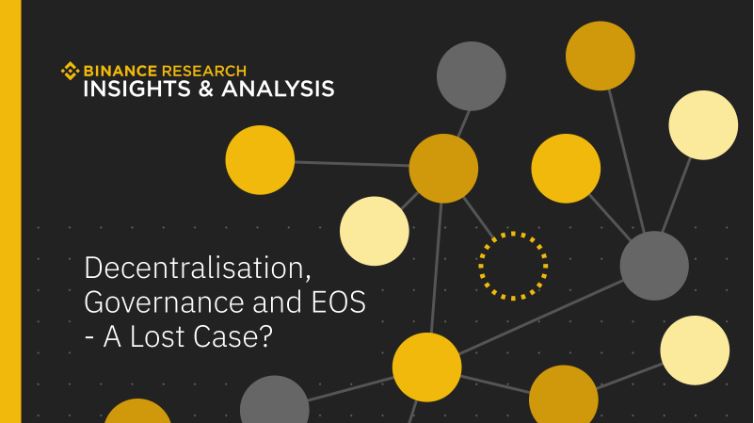 In the latest piece of research from the exchange platform, Binance they have asked whether the highly ranked EOS crypto project is too centralised.

Specifically, this question was conceived and analysed by Binance Research who are well-known for their various reports that give an insight into different market trends and what they mean for the investor. However, this is one is of particular interest as it focuses on one of most recognised cryptocurrency projects in the industry, EOS, and asks whether it doesn’t abide by the traditional sought-after standards of blockchain and digital assets as it is not decentralised enough. It is interesting that this issue has been raised by Binance due to the fact they personally are heading further into the area of decentralised following the launch of their DEX last year.

In the somewhat scathing report titled “Decentralisation, Governance and EOS – A Lost Cause?” the study takes a look at EOS and its different features to understand that whether due to the nature of the project, it is missing out on some important elements that can drastically affect whether it is a worthy project for investors to put their money in. The research is said to be by Binance as somewhat of a reaction from existing sentiments about the project that recently celebrated its second anniversary of launch.

Binance stated in regard to this, that “owing to its high market cap, EOS, a delegated Proof of Stake consensus network, has oftentimes been picked out and labeled as a victim of its governance, where the largest EOS holders further consolidate their position and hold all the power”. The report then went on to elaborate on the structure of EOS and the implications for that and its purposes. They raised concerns, most notably, about collusion resistance alongside other elements that EOS lack of centralised has on the asset that might be worth considering.

In terms of collusion resistance, they noted that due to the promotion of vote-trading and selfish in the pursuit of their incentive structure acts mean that it is susceptible to induvial parties having the ability to drastically change votes. This can be conducted via proxies or block.one, according to the research, and that the platform “lacks mechanisms” to prevent this. This was the first issue raised by there were two further issues that EOS has.

The first of which is fault tolerance, notably in regard to operational metrics that measure reliability and capability to react. According to the platform ⅔ of the exchanges operating as block producers (BP), had the worst performance among the 21 BPs, with then being two incidents where failures occurred. The second relates to attack resistance where they also fail to make the grade. With the research drawing attention to two clusters of block producers which “evidentially displayed in correlations between voting patterns and regional distribution.”

All in all, it is a fairly damning report that doesn’t bode well for the assetor its ability to be fit for the purpose it is attended. Binance sum these issues up by saying “EOS problems seem to be enabled and aggravated by a number of issues such as low voter turnouts, little resistance to Sybil attacks, coherently little transparency, the 1-token-30-votes system, and the changed block rewards,” according to Binance Research.

However, while this might be true, it has seemingly not been noticed by the world of investment, EOS is ranked 8th by Coinmarketcap. This places it one spot ahead of Binance’s own token, BNB. However, at the time of writing, EOS has crashed in value by 6.61% which made it the worse performing top 10 crypto asset, except for Tezos, on what was a pretty bad day for cryptos generally.