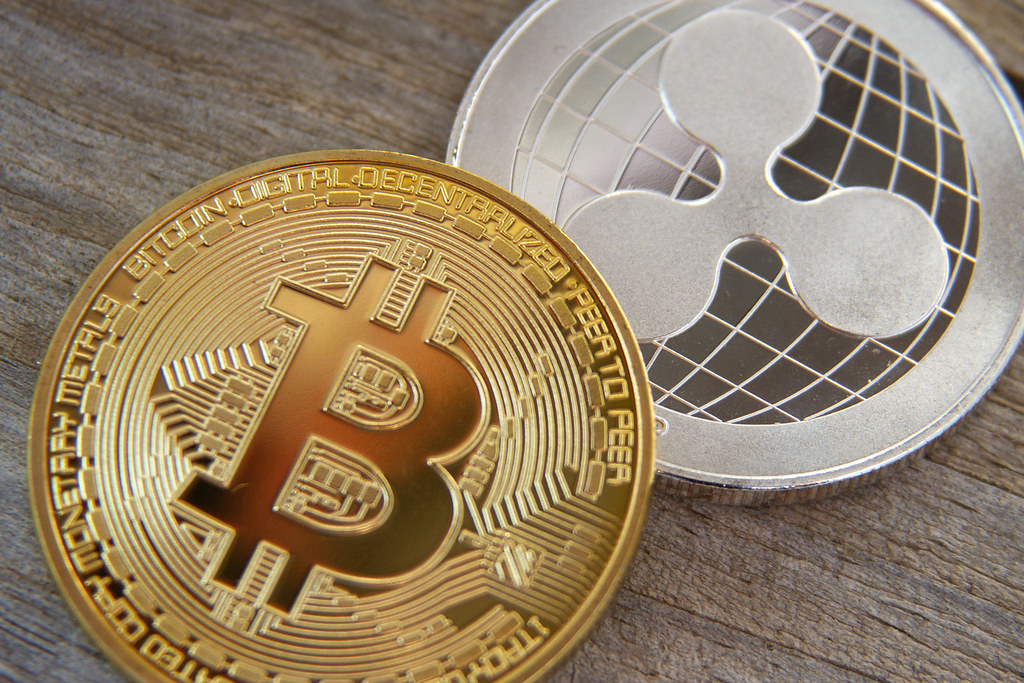 Both Bitcoin and Ripple are major cryptocurrencies that are openly traded on a variety of cryptocurrency exchanges. Bitcoin marks the single largest digital token, but Ripple is not too far behind, currently ranking in third place after Ethereum. While Bitcoin is the proper name of a cryptocurrency, Ripple is not. XRP is the cryptocurrency that runs on the Ripple Blockchain, but as often happens in the industry, the two names are interchanged. In this guide, we will compare Bitcoin vs Ripple to determine which one is better for investment.

Bitcoin vs Ripple: What are Their Purposes?

Bitcoin was the first cryptocurrency, launched in 2009 by Satoshi Nakamoto. Partly as a result of the 2008 financial crisis, Bitcoin was launched as a convenient and practical way to process payments without requiring financial intermediaries, such as banks.

Furthermore, Bitcoin was designed to be decentralised, meaning that no central authority, such as a central bank, would have control over it. Bitcoin’s decentralised nature created a network of global miners who maintain and update the Blockchain upon which the currency exists. In this way, Bitcoin also became the first democratic currency accessible around the world.

Ripple (XRP) on the other hand, was established in 2012 with a significantly different ambition. In fact, Ripple is popular amongst financial institutions which use it to facilitate cross-border payments using traditional, fiat currencies. As a result, this cryptocurrency succeeded to turn what was commonly a lengthy and expensive process into an efficient, low-cost, and even safer improvement.

Ripple (XRP) and Bitcoin (BTC) can be traded on the following platforms:

All these platforms offer tight spreads, great analytics tools and the ability to deposit funds with credit/debit cards or even PayPal.

The subject of cryptocurrency regulations is complicated since it varies considerably from one jurisdiction to the next. While some countries, such as Japan and Malta have developed some form of the regulatory framework, the majority of governments have yet to formalise rules on the matter. Whilst the majority of countries are open to the idea of cryptocurrencies, a few, including Pakistan, outright ban their use.

Unlike fiat currencies, Bitcoin and Ripple’s decentralised nature means that it can be difficult to determine which state has jurisdiction over any particular transaction. Progress in this regard is slow, and you should keep in mind that cryptocurrencies have only been around for a little over 10 years, with the majority existing for far less than that. There have been, nevertheless, developments in the field of cryptocurrency and taxes as well as the precise definition of a crypto asset.

A common concern regarding the cryptocurrency industry is anonymity, and how this can aid criminals. While there is certainly an argument to be made in this respect, most of the reputable organisations within the industry have decided to self-regulate in the absence of state-led regulation. It is for this reason, for example, that you will find many cryptocurrency exchanges which enact Know Your Customer (KYC) procedures.

Even when regulation is proposed, it can be difficult to put all cryptocurrencies in the same category. Bitcoin vs Ripple have significantly different purposes and they function in equally different ways. These two digital currencies are hardly an exception, with major differences between Bitcoin and Ethereum and Bitcoin and IOTA as two examples.

Although Bitcoin has gained worldwide notoriety for its speculative nature, it is also functioning as a proper form of currency. Today, you can pay for products and services with Bitcoin in an increasing number of stores and chains, including travel sites and online casinos. You can also use Bitcoin to pay in-store, using a special type of Visa, but the number of merchants which accept this form of payment is still fairly limited.

XRP was never meant to be an alternative to fiat currency but was designed as a tool to processes payments between different banks, oftentimes using different currencies. As a result, the greater majority of Ripple users are corporate or financial institutions. The majority of individual owners of Ripple probably own it in order to speculate with it.

Bitcoin is mined by anyone who has the necessary processing power to successfully create new blocks, and apart from this, there are no barriers to entry. The Bitcoin Blockchain allows for almost complete transparency and accountability, a truly immutable ledger.

The majority of XRP is privately owned by Ripple, and its internal ledger is less open and democratic than Bitcoin’s. This lack of democracy enables the cryptocurrency to develop faster, allowing it to face off upcoming challenges better. Bitcoin, on the other hand, is slow to react to a changing environment, and as a result, has gone through several forks, including the Bitcoin Cash split.

Bitcoin and XRP are openly traded on numerous cryptocurrency exchanges and trading platforms. Both currencies are considered to be volatile, with price changes occurring every few moments. Representing two of the top three largest cryptocurrencies by market capitalisation, you are able to buy, sell, and trade both Bitcoin and Ripple on the majority of exchanges.

Apart from investing directly in Bitcoin vs Ripple assets, some investors prefer to purchase cryptocurrency financial instruments, such as Contracts for Difference (CFDs). When buying Bitcoin CFDs, for example, investors don’t actually purchase the coin, so don’t need to worry about storing it securely. Instead, they purchase a document with a set price and execution date, which they can trade based on what they believe the market would look like in the next few hours or days.

eToro is amongst the best platforms; the global platform offers in-depth guides to help you pick the right currency and tools to analyse historical data and future trends. You can use eToro even if you don’t own any cryptocurrency since you can fund your account using cards, bank transfers, eWallets, and a host of other payment methods.

Both Bitcoin vs Ripple gained their highest-ever values towards the start of 2018. Bitcoin made global news as its price shot up to almost $20,000. This led to a frenzy of new investors buying Altcoins in the hope that their prices would also skyrocket. As a result, Ripple gained 35,000% within a few weeks, reaching $3.84 for a short period of time.

Sending a payment using Bitcoin takes around 10 minutes before the transaction is confirmed. Compared to a traditional bank transfer, this speed is significantly high, but when comparing it to a common card payment it is painfully slow.

Bitcoin started out as a faster and cheaper alternative to bank transfers, but it became a victim of its own success. Unable to cope with such high demand, Bitcoin’s transaction became slower. To make matters worse, the sharp increase in the value of Bitcoin led each payment to become quite expensive. In December 2017, when Bitcoin’s value surpassed $19,000, transaction fees could easily add up to $40, which made using Bitcoin for payments unfeasible in most cases.

Ripple transactions are much faster than Bitcoin’s and usually average a few seconds. Associated transfer costs are also significantly lower, with a standard transaction costing just 0.00001 XRP. To put this in perspective, in January 2018 when Ripple’s price peaked, it would only cost $3.29 to make a transaction. Today, the cost is much lower than that.

Bitcoin’s infrastructure is only able to cope with approximately seven transactions per second. Ripple, on the other hand, can easily process upwards of 1,500 transactions every second. This is still comparatively smaller than the 50,000 transactions Visa can process per second, but its a massive leap from Bitcoin’s to Ripple’s Blockchains.

Bitcoin vs Ripple: Reaching a Consensus

In order to create a new block in either the Bitcoin or Ripple Blockchains, a consensus needs to be formed. Every machine (node) connected to either network can play a role in forming this consensus, and it normally takes 50% or more nodes to agree for a new block to be added. The consensus mechanisms of Bitcoin and Ripple are somewhat different as outlined below.

Bitcoin was the pioneer of the consensus mechanism known as Proof-of-Work (PoW). The Blockchain generates a random calculation which requires vast amounts of computational power to solve. On average, and based on today’s computing power, it takes an average of 10 minutes to solve each calculation. Once successful, a new block is added to the Blockchain and the nodes responsible are awarded with newly minted Bitcoins.

PoW is highly competitive and requires substantial investment in equipment. Furthermore, the process requires high amounts of electricity, making it increasingly expensive due to Bitcoin Halving events. This consensus mechanism is often cited as the reason behind Bitcoin’s high fees, slow transactions and scaling limitations.

FBA consensus does not come from nodes solving calculations. This makes the process faster, and consumes less electricity, helping to keep fees low.

Transaction validators within the network are normally banks which make use of Ripple technology. These are individually selected and accredited before they can verify any transactions. Vetting the nodes ensures that the network is kept secure since none of the banks would risk manipulating a network which holds their transactions. Even if one bank goes rogue, any changes would need to be accepted by other nodes within the trusted circle, which would be highly unlikely.

One of the best ways to understand the primary arguments in the Bitcoin vs Ripple debate is to have a look at this table which outlines the main differences between the two. In addition to this information, however, you should also consider the purpose behind either currency, and this can help explain why certain processes function in the way that they do.

Although Bitcoin vs Ripple are both cryptocurrencies, their scopes and functionalities are considerably different. In their own ways, both digital currencies are trying to revolutionise the way payments are done, yet to consider them to be competitors is futile. Their markets and users are significantly different.

If you are looking to invest in either Bitcoin or Ripple, then both present an attractive proposal. Although Bitcoin is better-suited to day traders, both cryptocurrencies should be considered when trading long. They are both significant coins whose value is bound to increase as their adoption spreads across the world.