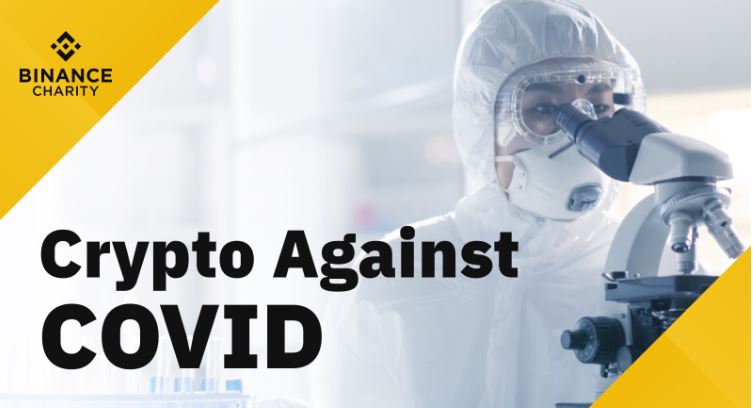 Binance Charity has put plans together to generate $5 million in donations which they will use to commit to providing medical supplies and help combat the effects of COVID-19.

It is impossible to get away from the news of the Coronavirus which has led to isolation and quarantines in many countries worldwide, among other measures put in place to stop the spread of the virus that is causing havoc. According to the World Health Organisation, Across the globe, cases have exceeded 300,000, cases confirmed in more than 175 countries, and more than 14,750 deaths have been reported globally.

To help bring this disease to a swift end, communities across the world have pulled together and are doing their bit to prevent the further spread. Binance, who are well-known for their philanthropic efforts, are one of the biggest profiles in the crypto community who are committing vast sums of money to help fight the virus with a new charity campaign.

The newest way they plan to do is via a new fundraising campaign that has been titled, Crypto Against COVID. From the get-go, the campaign will see Binance make an initial donation of $1 million USD to organisations around the world who are helping to provide much-needed resources and support to nations who have been worse hit by the virus.

Specifically, the campaign is focused providing buying medical supplies to heavily hit nations such as Italy, Germany, Spain, the Republic of Korea, Iran, Turkey, U.S., and the U.K. where there have been a large number of cases and deaths already.

After their initial donation, they will then follow it with a social campaign where they will attempt to raise a further $2 million by using the #CryptoAgainstCOVID hashtag. The platform has then committed to matching these donations by the public, thus arriving at the targeted $5 million figure that the campaign is hoping to reach.

This is the second campaign that Binance Charity has rolled out in reaction to the virus. The first came in January 2020, when the virus first began. Titled the “Binance for Wuhan” project, the platform donated $10,000,000 RMB (~$1.4M USD) worth of medical supplies to the epicentre of the virus in order to support the battle against the virus in China. They have so far been instrumental in getting medical supplies to the most hit areas and their statistics in regard to this are incredible.

As these numbers indicate, Binance Charity have been incredibly pro-active in their effects to bring the virus to an abrupt end and these all-important medical supplies are the best means to which to help support the doctors, nurses and volunteers who are putting their own health at risk to stop the virus in its tracks.

Helen Hai, Head of Binance Charity, stated that “the most important element of human life is to show compassion and help others as we can, without the limitation or restriction of borders. Blockchain technology enables this in greater capacities than ever before and Binance Charity wishes to bring this to the masses.”

Binance Charity is said to be the world’s first blockchain-powered donation platform which provides 100% transparency in their philanthropy. Go to Binance now to learn more about this area of their platform or to donate to this cause yourself.