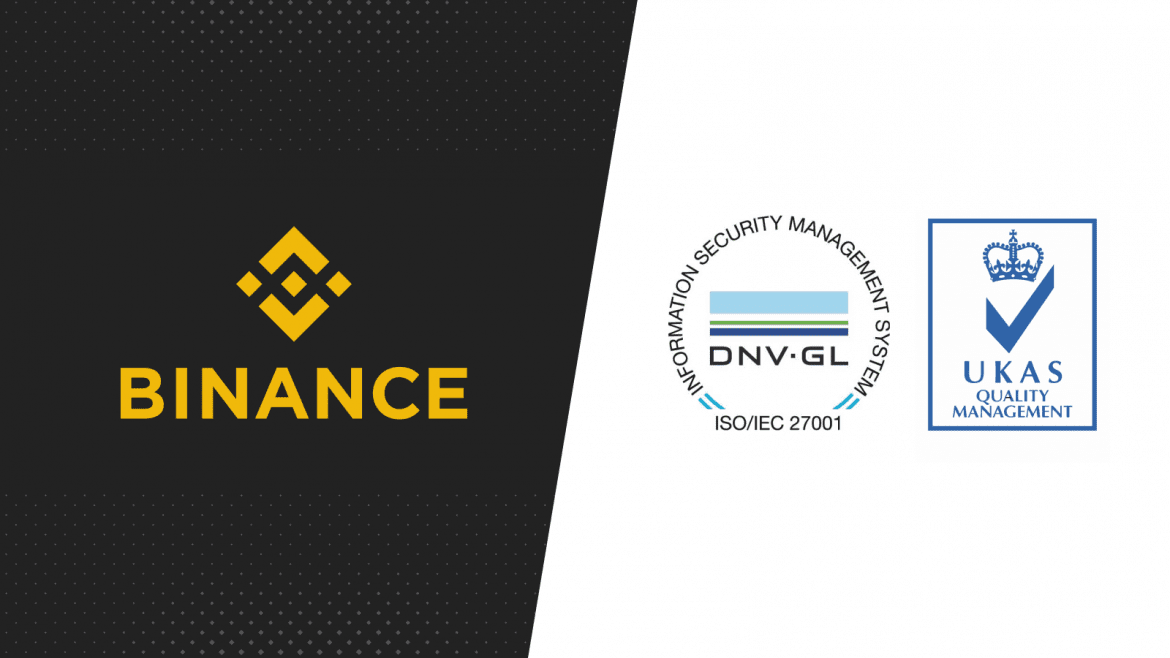 Today marks the day that one of the leading platforms in the world, Binance was awarded ISO/IEC 27001 accreditation.

This accredits the platform as being an institution with a universally recognized information security management system issued by International Security of Organization (ISO). With the platform becoming one of the first crypto-asset platforms to be recognised with the award and achieving the international information security standards required for the award to be given to them. In a nutshell, Binance has cemented itself as officially one of the most security-conscious and safe online locations to trade.

The awarded is audited by two separate firms both a significant stature within the world of security. One of these, DNV  is the world’s largest accredited registrar and classification society, while the United Kingdom Accreditation Service operates as the sole national accreditation body recognised by the British government.

“Security has always been the utmost priority for Binance and our users, and we are honored that Binance’s security management is recognized by the respected DNV and UKAS.” said Changpeng Zhao, Binance CEO, in regard to achieving the license. Before stating, “Obtaining the ISO certification is one significant aspect of our security commitment to the industry and our community.”

The process to earn the accreditation is a gruelling process where the firm had to pass an exam which consists of a whopping 114 criteria across 14 categories. Upon competition of this procedure, they earnt the approval of both the DNV and the UKAS, making them the first crypto exchange platform to do so.

Zhao explained there is still a long to go in order to maintain their credentials as a leading platform when it comes to security, explaining that, “we committed to continuously securing our users’ information and assets by further strengthening our security system”, and that they will, “continue to advance our investment and endeavours in improving cybersecurity defense.”

The award comes after a tough year security-wise for Binance though. In May, they suffered one of the largest ever recorded hacks from an exchange platform. Then, in August, they had to defend themselves from a second security slip after a conman claimed to have obtained KYC details from Binance customer and was attempting to blackmail the firm.

They have been open about these situations though and have also been laying out ways and means to ensure that users get the utmost security assurances. With this award seemingly being an acknowledgement that the platform is doing as best they can, despite these unfortunate security blunders.

In other Binance news, it was revealed that they have expanded their margin trading options with the inclusion of Matic margin trading on their platform via MATIC/BTC and MATIC/USDT pairs. Both of these pairs are up, running and ready for users to use.

Binance and Matic have a long partnership history, with Binance launching the Matic Network back in April. Binance Margin trading opened in July and has now allowed the pair to quickly expanded their operations together, as Matic becomes the latest to join a list of other major cryptocurrencies available to margin trade via Binance.