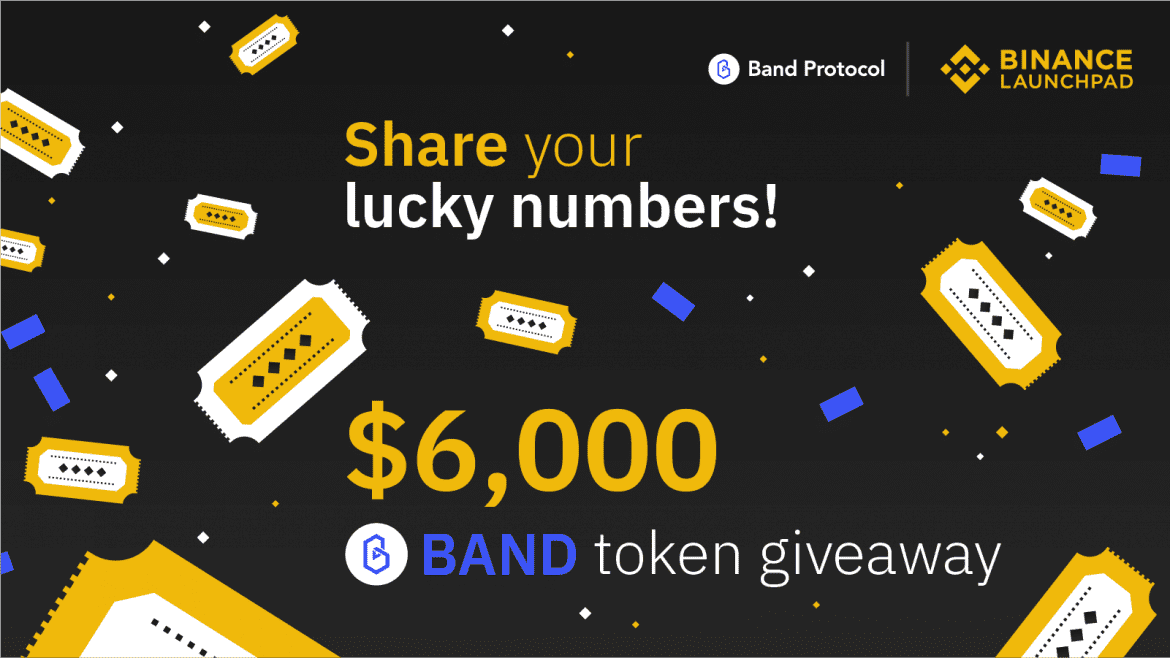 Binance has announced a new lottery to users where they can win a $300 worth of tokens each!

As we announced last week, the 9th Launchpad project from Binance of the year was confirmed by the exchange platform to be the Band Protocol. This had raised $3 million in seed investments from 3 different lead investors and was due for a token sale on the platform very soon.

Now, it is time to start getting involved with the sale now as they are offering users the opportunity to increases your chance of benefiting from it via their latest Lottery Promo on Twitter. Users have between now and early tomorrow morning at 6 am (UTC) to be get involved by completing the following steps:

2. Tweet at least one of your 7-digit lottery ticket numbers for the Band Protocol token sale on Binance Launchpad.

20 users will be able to get their hands on individual prize sums of $300, which works out as 634.25 BAND. Make sure you are following both the @Binance and @BandProtocol on Twitter and in 14 days you could find out that you have earnt yourself a significant sum from this lottery.

This is just the latest in a long line of these lottery giveaways, so even if you miss out on a chance to win on this one, it is a concept well worth being knowledgable about. As such, head over to Binance now to find out more about their lotteries and how to get involved and find out the number you need.

CoolWallet have updated the features on it’s the exchange part of its CooBitX app. There are a number of changes both in terms of design and functionality on the app from the crypto wallet, but perhaps the biggest update to the feature is the fact that you can now choose between the rates of two […]

Trade.com have taken to Facebook to make users aware of the potential investment opportunities currently present in airline stocks. The reason they have highlighted these possibilities at this time comes from the news that after shutting its border during the corona pandemic Spain are preparing to open their borders again. The nation has outlined plans […]

If you are looking to get today’s trading off on the right foot, then AvaTrade has offered up two things you need to know to start your day. The first of these two things is the need to pay attention to the escalating situation between China and the US. On Monday, they had already discussed […]

Understand Options CFDs at Plus500

Plus500 have released a new guide to understanding Options CFDs. The guide to one area of their wide range of services was drawn attention to this morning over their twitter page. In the post, they reminded users that Options CFDs can be traded on Shares, Indices, Commodities, & more, while also telling users that it […]

Exchange platform, Binance will be hosting a trading competition for the token of the Matic Network. Over the course of the competition, 50,000 USD worth of Matic will be available for those participating in this event. While it is one overall competition, in reality, there are three separate promotions that will make up the event […]

IQ Option Explain Why You Might Be Losing Money

Are you losing money? If so, then IQ Option’s latest blog may be able to explain why. Titled “Why Do I Keep Losing Money?” the posts explains some of the most common reasons why traders tend to lose money and then elaborate as to how they can change that situation. While of course, as they […]

Asian markets have started the week off slowly due to investors becoming wary of the China-US relations, explain AvaTrade. Following the closing of lockdown in China and their markets beginning their recovery, there have been new reasons for Asian market investors to be concerned. Specifically, China’s action in Hong Kong, which, according to AvaTrade, is […]