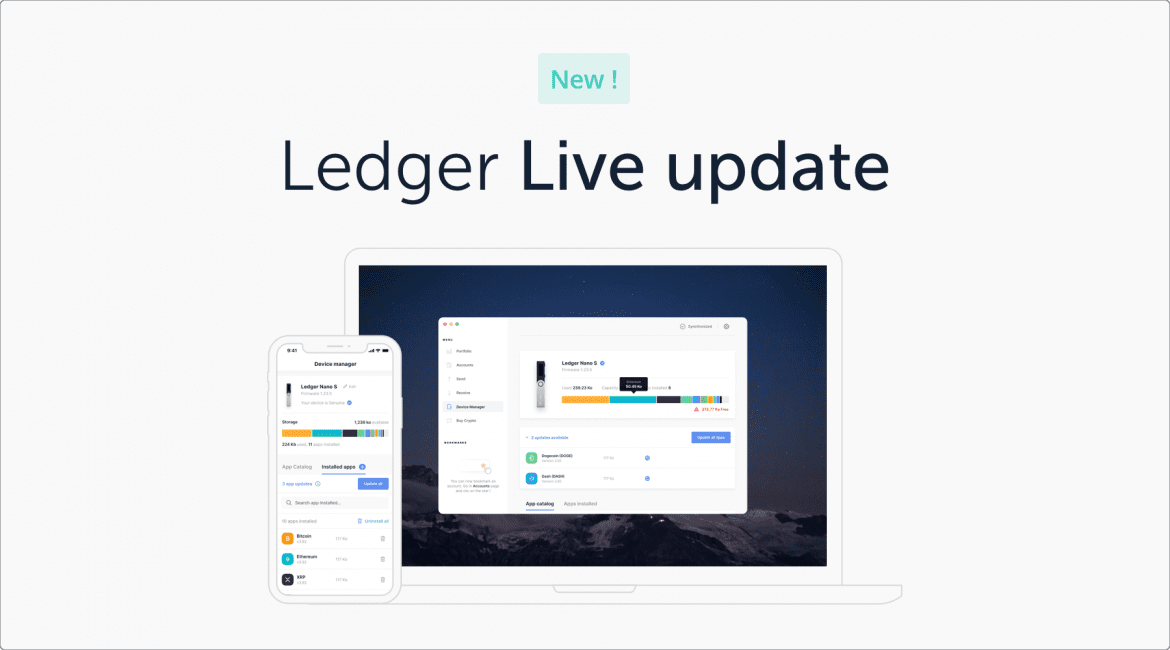 The Ledger Live Manager Version 2.0 is a marked improvement on the original version that went live two years ago in July 2018. While Ledger Live, which the management system oversees has been regularly contributed to, notably with the addition of elements like Tezos staking services or the provision to natively support ERC-20 tokens, the Live Manager itself has remained unchanged since its inception.

Naturally, all technologies need updating and two years in the world of blockchain is especially long with the rapid development in terms of adaption. With this considered, while their original Live Manger was still adequate, the new and improved version will certainly be a breath of fresh air for all the Ledger users who regularly use the system.

In terms of the improvements, these are four-fold and will target some of the most important tools that can assist and simplify the use of Ledger Live. Namely, the improvement has been implemented on app management, efficiency, storage insights, and an insight into potential crypto assets that can be used on Ledger Live.

In terms of the new app management features, this is essentially a completely new addition. Previously, owners of the Ledger products who used Live could not view apps on the hardware device via the Live Manager. This was a hindrance as you can have as many as 100 apps on the device.

Thanks to the update though, this is now possible so you don’t have to scroll through your device endlessly to see what you do or don’t have. Furthermore, it will tell you if your app is outdated so you can act – thus ensuring no apps have bugs and all security features are as up to date as possible.  In fact, the Ledger Live Manager 2.0 has an auto-update feature so you can also simply update apps with the click of a button.

Of course, this is much quicker but they have also increased speed in an area where it was more critically needed – Bitcoin and Ethereum dependent apps. Previously, you would need to uninstall and reinstall these two’s respective apps in order to update any app dependent on it. This is now an issue of the past and the auto-update feature will also do these for you. Therefore, saving you time in this area too.

With these easy ways to manage apps, you might be encouraged to get downloading and accessing more apps at your disposal. Fortunately, with the new update, you can now also have more insight into how much space you have left on your Ledger Wallet. As well as this, on the new Live Manager 2.0, you can also see how much space each app is using. All in all, you will be able to better manage storage on your device and be able to prioritise it more efficiently for your needs and remove any bloatware.

The final addition comes in the form of the core reason you would even own a Ledger device – crypto assets. In the past, according to Ledger, many users have asked: “why someone cannot add a certain crypto asset account in Ledger Live?”.

Now, thanks to the update, the app will answer this for you. This is via a new filter and table that tells you whether you can manage a crypto asset in Ledger Live or not. Moreover, it will also give you links that indicate how non-compatible crypto-assets can be managed.

Alongside all these functionality additions, UX improvements, big technical updates and flow designs have also been added. Ultimately making the service better all-around then it was before. Explore it now at Ledger.