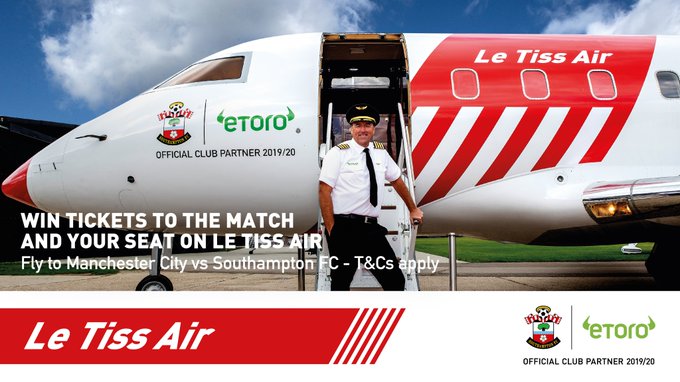 eToro has announced news of a new promotion, known as Le Tis Air, which will give users the chance to win tickets and travel to Southampton’s away fixture at Premier League title holders, Manchester City, next month.

It wasn’t a great weekend for Saints fans, after suffering a 4-1 home defeat to Frank Lampard’s Chelsea. With this in mind, this new deal couldn’t come any sooner for their fans. The deal works in partnership with legendary Southampton striker, Matthew Le Tissier. Hence where the name of the new competition comes from.

In a tweet announcing the new promotion, they note that they “know you’re travelling more miles than the average @premierleague fan”. As such, the foundation of the competition is to give their fans the opportunity to cut costs and travel stress by flying you directly over to the Etihad Stadium. Where fans will watch the action unfold in the away stands as the two teams face off.

The competition couldn’t be easier to get involved in either for true fans. As it is a simple three-step process where you just describe your favourite ever Saint’s goal via Twitter to their social media team, which could well be from Le Tissier himself. Basically, the deal works out as follows:

2) Reply with your favourite ever Southampton goal

Only one lucky fan will randomly be selected to watch the match courtesy of eToro, but they will be awarded two tickets so you can bring a fellow Saints fan, whether that be your wife, brother, mother or pal.

You need to move quickly though as the competition only runs from 08.10.2019 up until 11:59 am on 14.10.2019, so you now have just a week to claim this ticket ahead of the fixture of the 2.11.2019. Also, don’t forget that you can get loads of more great promos, as well as top trading experience with unique services, by signing up and benefiting from eToro’s exchange services.