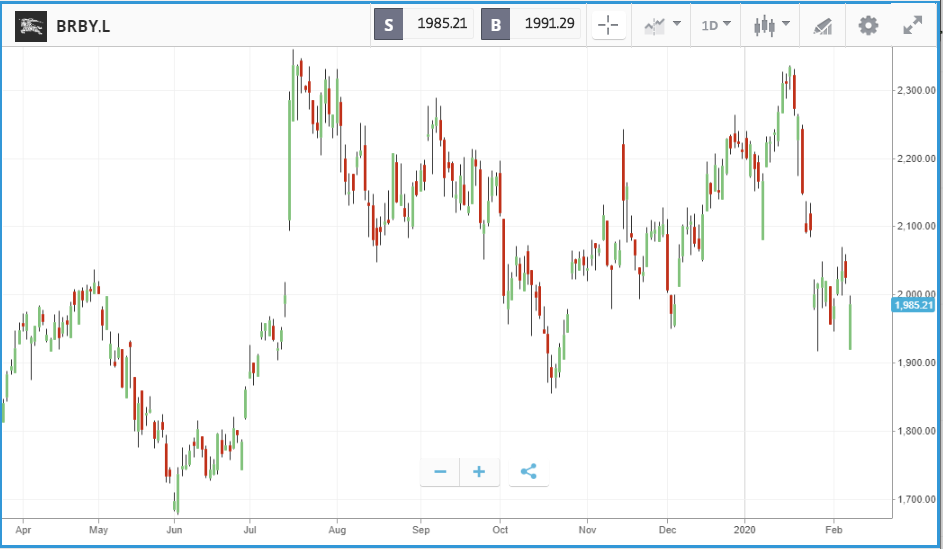 As the Coronovirus panic continues in China yet another company has spoken out about their concerns about the virus and its impact on the market.

The company that is sharing further concerns is the luxury fashion brand, Burberry, after having already closed 1/3 of their stores in China in a reaction to the virus that has claimed the lives of over 400 people in the country. In a new statement released today, they have indicated that their concerns run deeper than previously thought and that they feel that the virus could have a larger impact on the market than they had expected as the condition in China worsens and thus, are taking the necessary steps by which to ensure that they do not suffer big hits.

According to a post on CFD and crypto trading platform, eToro, Burberry CEO, Marco Gobbetti stated that they “are taking mitigating actions and every precaution to help ensure the safety and wellbeing of our employees. We are extremely grateful for the incredible effort of our teams and our immediate thoughts are with the people directly impacted by this global health emergency”, before explaining that “The spending patterns of Chinese customers in Europe and other tourist destinations have been less impacted to date but given widening travel restrictions, we anticipate these to worsen over the coming weeks.”

He also stated that Corona was having a “material negative effect on luxury demand”. This can be felt across the industry and they are not alone in their concerns as other big-name fashion brands such as Louis Vuitton and Gucci’ respective owners, LVMH and Kering who own have also seen their price suffer which has been considered as a direct result of the virus. While another big player in the world of fashion, albeit sports fashion instead, Nike has also raised concerns about the virus going forward.  As such, the fashion industry seems to be one of the many industries that are currently suffering due to the on-going issue.

However, there is some hopeful news from the country though due to China halving tariffs on $75bn worth of imports that are arriving from the US on February 14. Due to this, the Chinese economy did receive a boost and shares jumped both in China, as well as other affected areas like Hong Kong and Japan.  This also looked soothed the growing tensions between the two nations that have been on-going, an issue that China cannot afford to maintain if these current hardships continue.

According to eToro “US shares rallied on the news, pushing past last week’s coronavirus related selloffs.  All three major stock indices closed at new records, and the Nasdaq composite posted its 10th record close of 2020.” As such, the move led to good news all around and had a multi-faceted benefit.

This said, if you are still wary of typical stock investment in current climate then you should maintain crypto investment interests because, as we reported on Wednesday, the coronavirus may not affect them, or in some cases, could even be a positive. You can get involved at this at eToro.

The wallet product from the exchange platform, Coinbase has expanded its use-cases and will now allow you to earn simply by storing your assets on it. The way this will work is by allowing you to lend out your crypto through the wallet. However, they are not reinventing the wheel in respect to this service […]

Binance Charity has put plans together to generate $5 million in donations which they will use to commit to providing medical supplies and help combat the effects of COVID-19. It is impossible to get away from the news of the Coronavirus which has led to isolation and quarantines in many countries worldwide, among other measures […]

The Corona has caused one of the fastest sell-offs ever seen on the global market. How does this compare to other previous crisis? Well, eToro have answered that question in a new report released earlier today.   The market behaviour since the start of the virus has caused serious concern and a mass reaction from […]

Trade with Multiplier at IQ Option

In their latest guide, IQ Option have drawn attention to the risky yet rewarding multiplier option that they have in place on their trading platform. In a nutshell, the multiplier allows traders to “manage a position that is greater than the amount of funds at his disposal” according to IQ Option. Already by the name […]

ZEL Set To Go Live For Trading at Kucoin Tomorrow

Amid the market turmoil, KuCoin has continued to improve their trading options with ZEL set to go live for trading tomorrow. Deposits for this latest token in a long list of other recently added tokens has already gone live.  However, traders will have to wait until tomorrow to get fully involved in ZEL trading. This […]

Stay Safe and Save 15% on Trezor Wallets

Here at Cryptimi, we are aware that there is not much to rejoice about right now. Well, to remedy that, we have a special promotion that will see you save 15% on Trezor wallets.   The coronavirus is on-going and it is causing chaos across the globe, with a particularly negative effect on investments, both […]

CoolWallet have announced another new partnership for 2020 as they team up with the online exchange platform for physical bullion, Kinesis. The partnership will see CoolWallet delve into the precious metals trading market as this is the core focus of Kinesis who offer two native tokens that are backed by gold and silver. The way […]