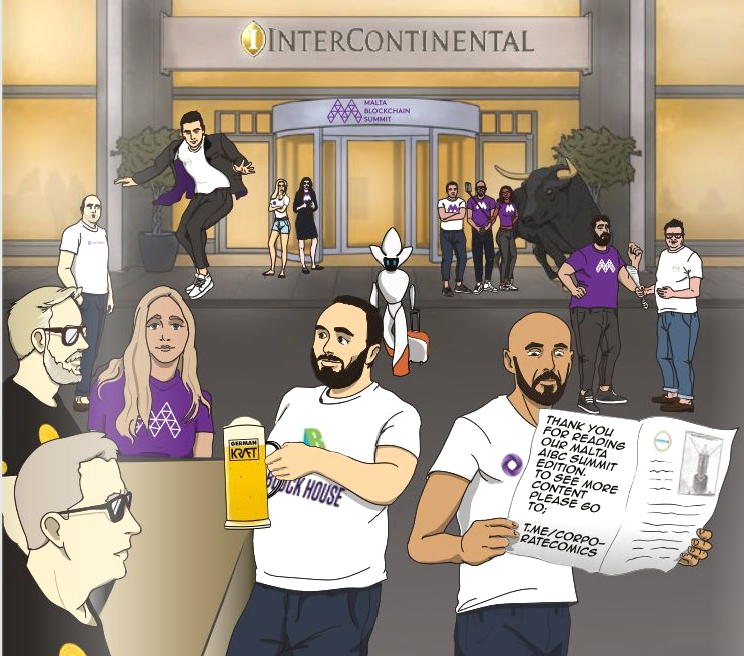 After what was undoubtedly a fantastic first day from the third edition of the AIBC Summit in Malta, our team at Cryptimi was all geared up for yet another eventful and insightful day. Just like the first day, we were literally spoilt for choice. So, we huddled up and came up with a practical game plan of what we should do before starting our next networking session.

Day 1 proved to be extremely informative and super interesting, but we didn’t expect anything less, what with the abundant workshops and presentations by speakers hailing from all parts of the world. Day 2 seemed to present an equally great selection of speakers who were there to share their pearls of wisdom.

Inspired by the ending from yesterday’s AI & BC for Education and Mass Adoption workshop, we thought it was apt to understand how this technologically advanced sector can contribute to the earth’s future for energy consumption.

Therefore, the apt choice was to head straight to the AI & BC for Energy workshop. So many interesting and plausible factors were discussed, that it’s almost difficult to highlight aspects which are noteworthy – because everything is worth mentioning in its own right.

From energy tokenization to energy data provenance, and from peer-to-peer energy trading models to renewable investments – such initiatives were put forward. It’s really no surprise, since we’re currently living in a world in which global warming, or the more ‘revamped’ term Climate Emergency is the main topic of everyone’s conversation. And rightly so, because we’re no longer blissfully ignorant about how precious saving the earth’s resources is, both for ourselves and our future generations and the generations that follows.

We can all benefit from the positive impact blockchain will have on the energy industry – whether a company or household. All there needs to be is a willingness to understand its potential.

Indubitably, we have entered a new age — the age of information, or what technophiles might call ‘big data’. Humankind is creating and consuming more and more data with each passing year. This data is not only becoming valuable in huge proportions, but increasingly more energy-intensive. This is where the importance to switching to renewable energy sources like wind and solar comes in. However, to truly tackle the issue, consumption needs to be reduced through technological innovation.

Granted, while this technology still has a long way to go before people welcome it with open arms, its infancy doesn’t deny the fact that AI could help to rapidly accelerate advancements. Take Google as an example: it has already proved the benefits of AI technology to reduce the cost of cooling at its datacentres by 40%. Scientists are now hopeful that such developments can help reverse the effects of climate change before it’s too late.

In this workshop, one of the speakers, Matthew Kaye, presented his thesis entitled How P2P Energy Grids are The Future of Renewables.

Modern power grids gather energy from multiple energy sources, including wind, solar, and coal. Over time, operating and managing huge power grids systems has become more complex. By means of AI efficiency, stability to these energy sources is increased thanks to its ability of analysing large datasets in a short period of time. This has led to the development of smart grids, which are designed to handle multiple energy sources (both conventional gas and renewables) in an efficient manner.

Then there’s the notion of Blockchain in energy trading using P2P and AI technologies. Blockchain technology with its safely distributed accounting system. This is a solid method of recording data through a digital ledger of economic transactions, agreements and contracts.

Of course, another fascinating talk, was the one given by Assaf Ben Or, who discussed Incentivizing Renewable Energy Using Blockchain. He discussed energy efficiency and changing people’s mindsets to help adopt energy saving and ‘greener’ behaviours in our daily routine.

This could be achieved with machine learning algorithms and blockchain, under a peer-to-peer energy trading platform. As a result, it will enable the increase of inter-connected microgrids enhanced to handle the renewable energy production to sell anything excess directly to their neighbours.

In layman’s terms, such renewable energy will be beneficial in a multitude of ways. Apart from being a more transparent, democratic and conscious use of energy, it also helps households become greener and more economical. Additionally, green energy won’t only be promoted but adopted within households, and thanks to the technology, be far more accessible to everyone.

The idea that AI and BC is very affordable and possible may not sound realistic to many, but this summit has taught us that it truly is. If a company has an innovative team, the vision can be turned into a reality. Indeed, this is what multi-award winning superstar, entrepreneur and philanthropist Akon (who, in case you missed it – was one of the main speakers in this summit) wanted to express.

But fret not… we’ll fill you in on our exclusive interview with him very soon. In the meantime, we’re off to get ready for the AIBC’s Closing Night Party at Sky Club, where Akon will be performing live!