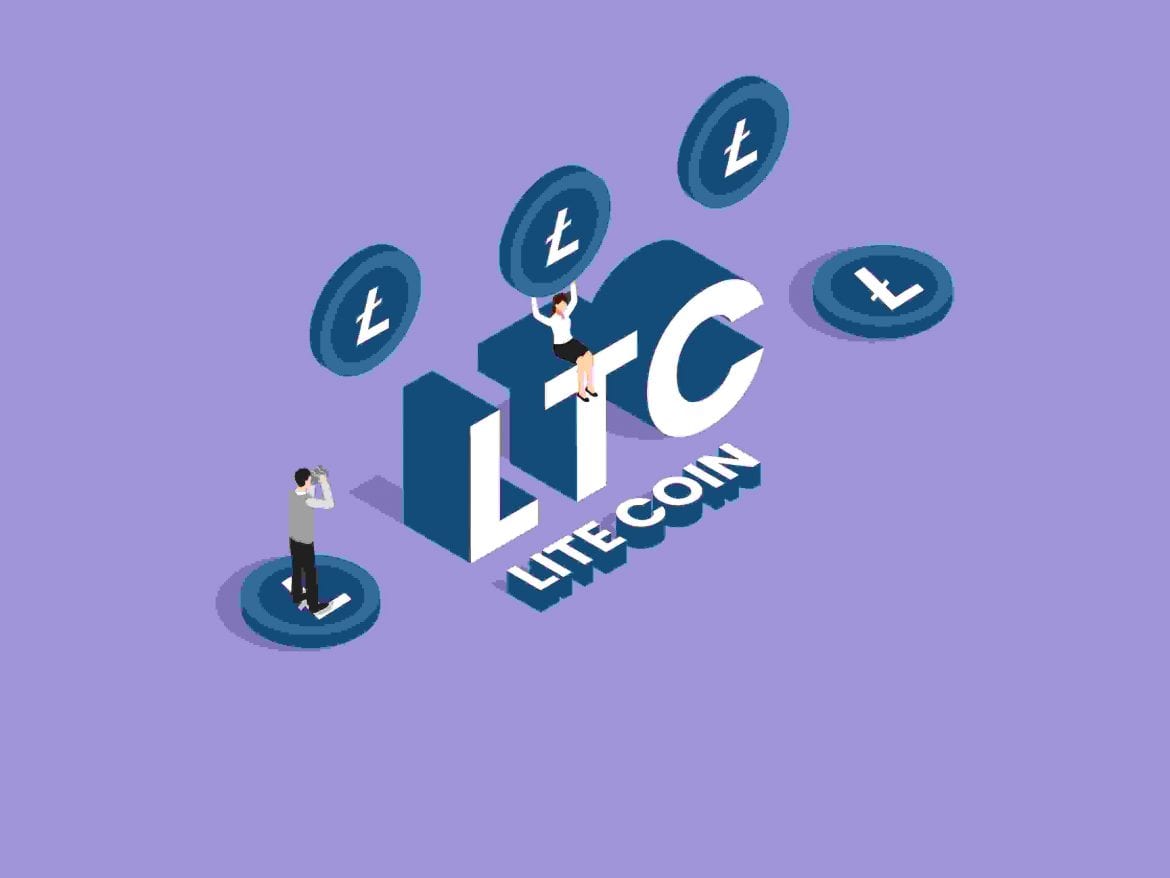 Litecoin is popularly known as the second cryptocurrency to be created, as it came to life in 2011 by a former Google employee, Charlie Lee. It is an open-source software that aids peer-to-peer cryptocurrency transactions. It is quite similar to Bitcoin and most times referred to as an altcoin or spinoff of Bitcoin. We cover the full details of what Litecoin is, with some other in-depth details, in a separate guide. So let’s delve into the question on everyone’s minds right now: is Litecoin a good investment for and a good addition to your portfolio right now?

Litecoin has in a way used its similarity with Bitcoin to gain traction and acceptance in the crypto space but its momentum has waned over the years because of the saturation of the crypto space. Just so you know what we mean, there are about 9,000 cryptocurrencies today. In November 2013, the value of Litecoin saw a 100% increase for about 24 hours. In May 2017, Litecoin was among the top 5 cryptocurrencies by market capitalization to adopt Segregated Witness. Litecoin achieved another milestone in that same month when it was used to complete a transfer of 0.00000001 LTC from Zurich to San Francisco within a second, making it the first platform to be used for a Lightning Network transaction.

Litecoin (LTC)
Learn more
Buy Litecoin (LTC)
This ad promotes cryptocurrency within the EU (by eToro Europe Ltd. and eToro UK Ltd.) & USA (by eToro USA LLC); which is highly volatile, unregulated in some EU countries and the UK., no EU consumer protection. Investments are subject to market risk, including the loss of principal.

Bitcoin (BTC)
Learn more
Buy Bitcoin (BTC)
This ad promotes cryptocurrency within the EU (by eToro Europe Ltd. and eToro UK Ltd.) & USA (by eToro USA LLC); which is highly volatile, unregulated in some EU countries and the UK., no EU consumer protection. Investments are subject to market risk, including the loss of principal.

How Does Litecoin Work?

Litecoin is a decentralized digital currency that is not issued by a central government agency. There is a total of 84 million Litecoins with 66 million in circulation. Litecoin’s market capitalization is pegged at $8 billion. Litecoin transactions all over the globe are documented in a block-a ledger entry every 2.5 minutes. This block ledger can be viewed and verified by a miner through a mining software. Incentives as high as 6 Litecoins are given to miners of Litecoin to encourage mining till the total supply of 84 million is mined. If this information caught your attention, we have a full guide on how to mine Litecoin that is sure to interest you.

The Growth Of Litecoin Over The Years

Litecoin has experienced a number of market fluctuations since its launch. Its value is not affected by monetary policies, economic growth measurements, and inflation rates like that of a fiat currency which is issued backed by a government and issued by a central bank.

The different factors that affect the rise and fall in the value of Litecoin include:

Since its launch, Litecoin has been consistently among the top 10 cryptocurrencies in terms of market capitalization in the crypto market. Looking at LTC’s price movement over the years will help us to figure out if Litecoin is a good investment.

Litecoin is an altcoin that has managed to survive the crypto market, unlike so many other altcoins that were launched in the same period between 2011 and 2013 which have all disappeared. The similarity of Litecoin to Bitcoin earned it the reputation of Bitcoin’s little brother. It is referred to as the Digital Silver while Bitcoin is referred to as the Digital Gold. This similarity with Bitcoin has in a way helped to sustain Litecoin in the crypto space.

From the time of its launch in 2011 to the end of 2013, Litecoin fluctuated between a few cents and $3. The upsurge in the value of Litecoin started in November 2013 when it rose as high as $50.

2014 was not a good year for Litecoin because of the scandal of the Mt. Gox exchange and the general bear run in the crypto market. The price went as low as $1 in January 2015.

Between 2015 and 2017, Litecoin consolidated its market price in the range of $3 upward. In 2017 especially, between March and July, it rose from $3 to $50, and between July and September, it rose from $50 to $80. Between September and December, it enjoyed the general cryptocurrency upsurge and rose to $371 in value. This was a 500% increase in value. Litecoin investors were smiling all the way to the bank during this period.

What Does The Future Hold For Litecoin?

It opened at $196 this year and it is predicted that it will close at $201 by December 2021. This can be attributed to the bearish run the market has been witnessing for the past two months. It is predicted that the market value will keep floating between $200 and $300 in 2022 and 2023. Going forward, Litecoin is expected to be valued at $500 at the minimum by the year 2025.

Clearly, there are prospects that Litecoin will increase in value in the coming years based on the predictions of experts. Another encouraging sign is the fact that Litecoin is often used as a test network for any proposed Bitcoin technology. This is because of its similarities with Bitcoin, the number one cryptocurrency in the world. This will ensure that Litecoin continues to enjoy relevance. Technologies such as SegWit, Atomic Swaps, and Lightening Networks were all tested on Litecoin before applying it on Bitcoin. It has found a way to improve on Bitcoin technology which makes it more attractive to tech enthusiasts and it is only a matter of time before its value commensurates with its use case.

Also, the Litecoin Foundation through TokenPay acquired a 9.9% stake in WEG Bank AG, a German bank that is mostly used by Real Estate investors. You can say that in the nearest future, Litecoin could be the currency that will be used to purchase or invest in Real Estate in Germany in the coming years. Only time will tell. It has also managed to have an agreement with the Venezuelan government for it to be used as a means of payment in Venezuela’s mainstream international payments system. What this means is that foreigners can now send Litecoin to family and friends in Venezuela through the Remesas Remittance Platform. The Venezuelan government charges a commission of 15% on every transaction. This is a major milestone for the Litecoin team. Partnering with a Federal government is no mean feat as it is a form of endorsement of the currency. Other nations may consider doing this with Litecoin, which bodes well for current and future investors of Litecoin. It is also a trailblazing feat for other cryptocurrencies to follow and start looking towards partnering with governments.

Why Should You Invest In Litecoin

Litecoin technology is a faster and cheaper alternative than Bitcoin when it comes to handling payment transactions. For example, it is useful for handling micro-transactions such as paying for something as small and cheap as a cup of coffee. Works are also ongoing in implementing the Lightning Network Protocol and Applications for privacy and smart contracts. Software updates and new technology can easily be added to Litecoin to make it more attractive. This is an advantage and a reason why you should take the opportunity and invest in Litecoin.

The recent market crash has not done any cryptocurrency any good but for Litecoin, there are high hopes that its value will soar in the coming years. There is no better time to invest with the market crash because Litecoin will surely be a sought-after coin for investors in the future. Its technology benefits its users and Bitcoin users which is a fact that cannot be ignored. This fact alone makes it attractive to investors even without knowing its other use case. It is expected to have crossed the $500 mark if not more, by the end of this decade.

Litecoin has established itself as a reliable and constantly evolving altcoin. The continuous improvement of its tech terms makes it a choice of investment and you cannot afford to be left out. Experts have forecasted that Litecoin will continue to rise in value considering the current use of its technology and other projects in the works. Experts and investors alike see Bitcoin as the gold and Litecoin as the silver. Using the analogy of these precious metals, you know what that means. Your guess is as good as ours, but I hope we helped you on your journey to answering the question “Is Litecoin a good investment right now?”.