CryptoReels is owned by Club World Group, a company that has been around for over twenty years, which obviously translates to plenty of experience in the online gaming business. Moreover, CryptoReels is one of the online casinos around that accepts Americans as players, which is fantastic news for you yanks! Oh, but the good news doesn’t stop there; read on to find out. 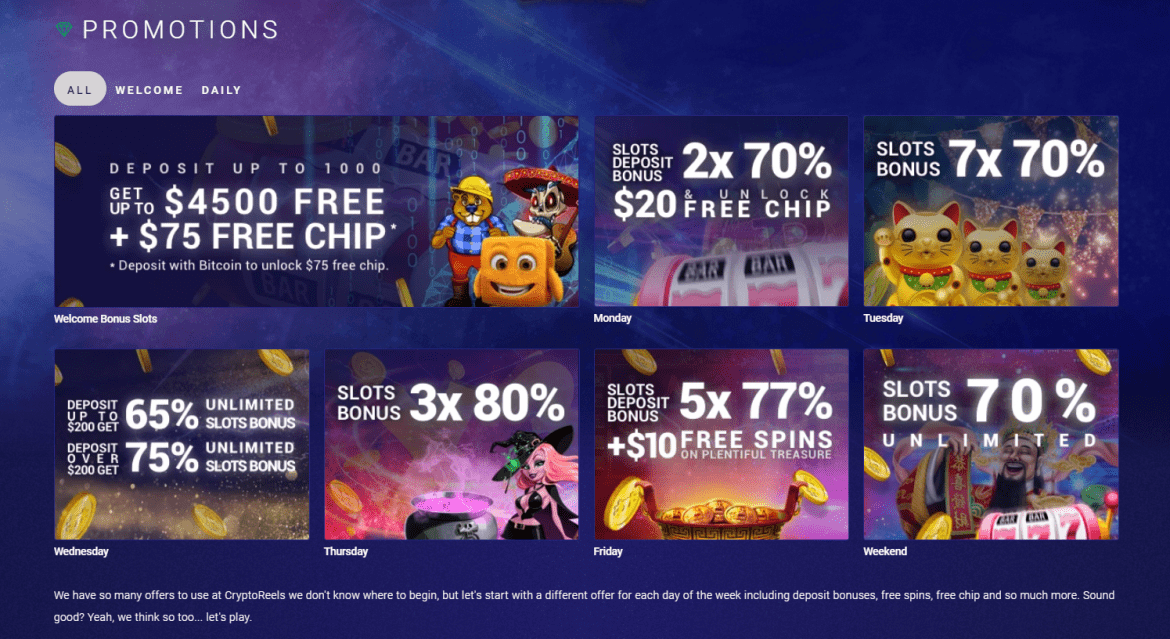 This is a little extra for those punters that make their first deposit with Bitcoin; so if you’re not convinced about using Bitcoin yet, maybe this could change your mind a little. On top of their rather generous welcome bonus, CryptoReels offers different bonuses every day, including free spins, slots bonuses and deposit bonuses! Sadly, however, they don’t offer any loyalty programmes.

CryptoReels doesn’t hold as many games as we’d usually like to see in the online casinos we review. Being on so many casinos with thousands of games in their selection has made us spoilt. Jokes aside, having a massive selection of games to choose from is always a positive thing, especially if you get bored playing the same few games over and over. 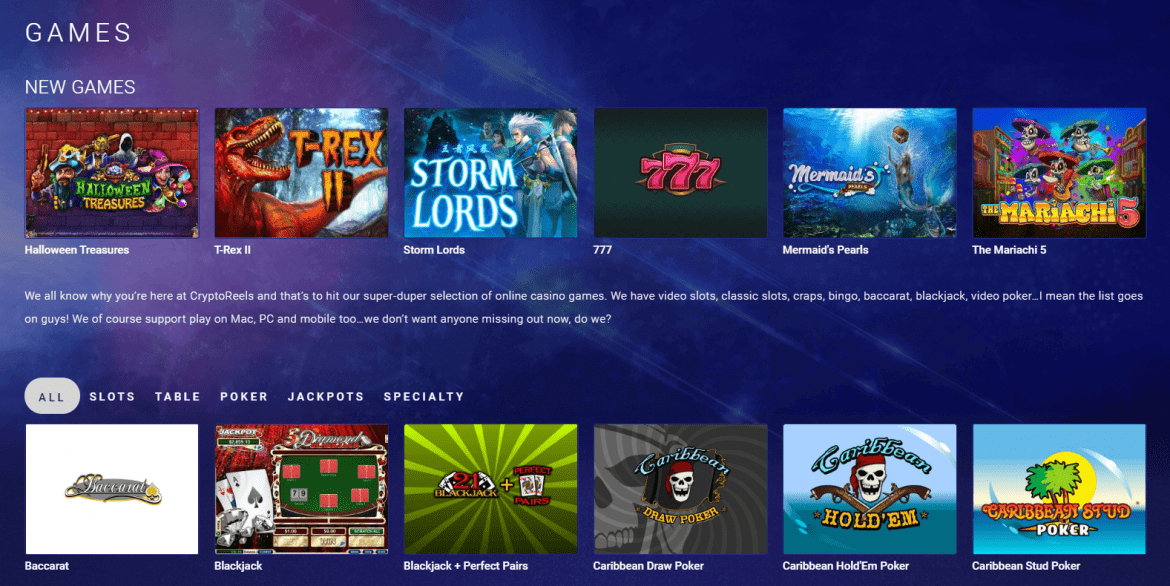 However, the bright side of all this is that CryptoReels actually offers games of different varieties, so those punters that don’t particularly enjoy slots won’t get bored! They have table games like baccarat, poker, blackjack and roulette, live games and also jackpot games. If that’s not enough, the next section has some more good news.

Sadly, it seems that CryptoReels only offers games from one game supplier, which isn’t the best, given the fact that different games developers offer their own unique and bespoke graphics.That said, the good news is that CryptoReels gets its games from RealTime Gaming, who, as most of you probably already know, is one of the biggest names in the software provider industry, especially since they’ve been around since 1998 – quite a number of years’ worth of experience under their belt, if we do say so ourselves!

Obviously, like just about every other online casino on the web, you’re going to need an account. However, fret not, because CryptoReels offers a very fast account creation process that takes mere minutes to finish. Simply click any of the “Sign Up” buttons floating around their site and fill in the required details. Afterwards, you’ll need to verify some details and then you should be good to go.

A full list of restricted countries can be found here below:

Of course, getting the fun going is a simple payment away; otherwise, what’s the point of playing, right? However, does CryptoReels facilitate your payments to get some fun started or is it just about impossible to get a deposit in? And what about withdrawals? Are they instant or do you need to wait days to get your winnings in? This section aims to answer these questions.

CryptoReels offers quite a few deposit methods which punters can choose from, with some of these methods being fairly common ones, like Skrill, Neteller, ecoPayz, Visa, and MasterCard, which is great for punters that depend on these payment methods. Moreover, they obviously accept Bitcoin, which is even better since it accommodates a larger range of players.

Furthermore, the minimum amount a player can deposit is $35, which is a little on the high side. As for the other end of the spectrum, they don’t seem to have a cap on their deposits. Finally, their deposits seem to be instantly processed so that means you don’t have to wait for the fun to begin, right?

There are also a number of methods that punters can make use of, including Skrill, Neteller, ecoPayz, and Bank Transfer. Other than these, there’s obviously Bitcoin, which is fantastic news for punters that prefer using cryptocurrency for all their transactions. The minimum amount that punters can withdraw is either of two amounts.

It can be either $50 (which applies to E-wallets) or $200 (which applies to Bank Transfers or Check), which is decent. As for the maximum amount, punters are allowed to withdraw $5,000 every week, which isn’t too bad. Lastly, the processing times of withdrawals are generally instant, however, for some withdrawal methods you can wait anywhere between 24-48 hours.

We’ve seen in the previous section that CryptoReels offers state-of-the-art security measures to keep your information and its transactions safe. However, how can you truly trust CryptoReels? Well, being authorised and regulated by the Gambling Authority of Curacao should be an indication that this casino is trustworthy.

But, what about when the proverbial excrement hits the fan and the addiction hits badly? Will CryptoReels be there to help? Yes, of course! CryptoReels takes both underage and responsible gaming very seriously, and in fact they suggest precautions and offer measures to help combat both of these grave issues, including self-exclusion, deposit limits, etc.

The time has come to conclude our review and to tell you lovely readers what we think about CryptoReels. Well, CryptoReels certainly has many good features, including the fact that they import their games from one of the biggest names in the business, their astoundingly wonderful welcome bonus, their fantastic regular bonuses and their excellent customer service. 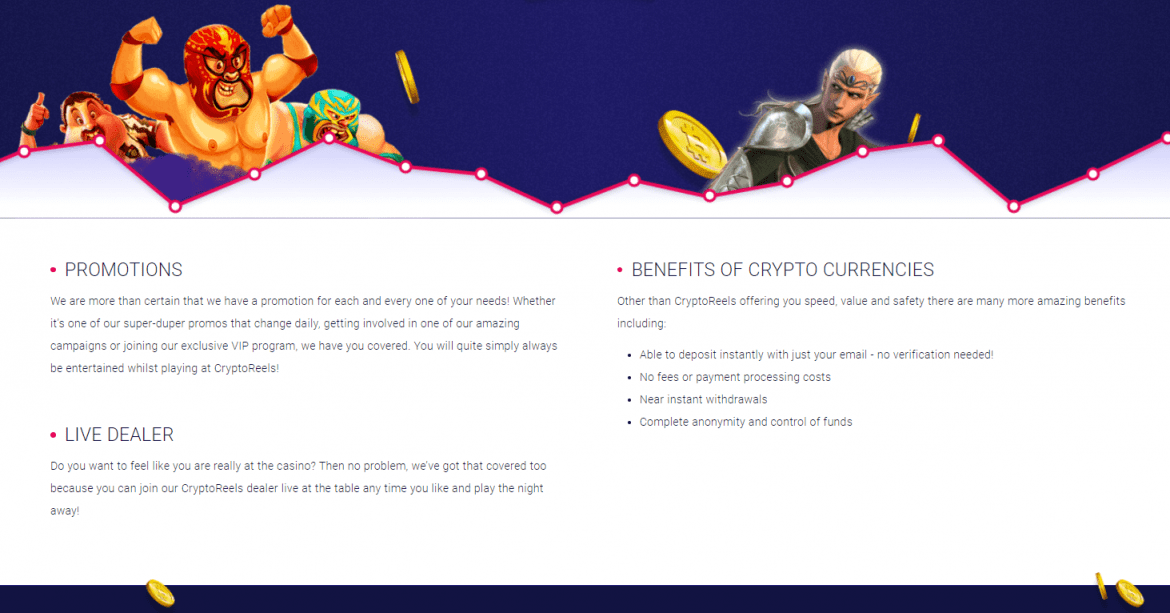 Moreover, accepting Bitcoin is always a great thing for an online casino to do since it accommodates those punters that prefer paying with cryptocurrency. CryptoReels obviously has some shortcomings, just like everything else, like their limited selection of games and only being available in one language, but we think CryptoReels has the makings of a genuinely good casino.