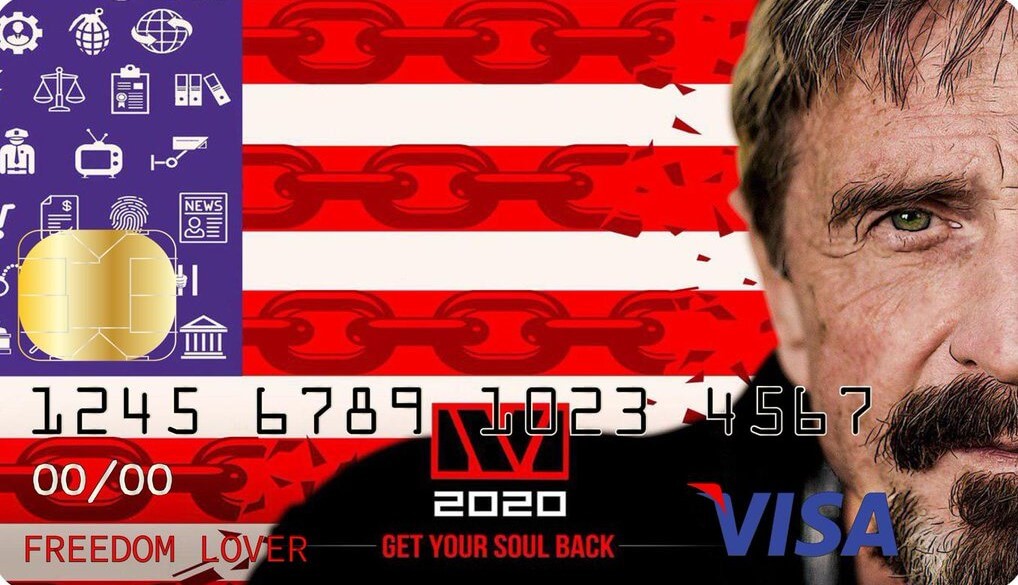 Demos of a new bitcoin credit card have been displayed online by none other than John McAfee, but are they legit?

The American software millionaire and potential next president, John McAfee has taken to Twitter to announce news of a new card that would-be consumers could use to make payments via bitcoin “EVERYWHERE” in the world.

He first dubbed it the “first crypto credit card” before reiterating that it would resemble more the format of a debit card, where you would load the card with crypto. Then, when you are out and about, you could make transactions with the card and the payment would be converted automatically into the currency you needed for the payment. The transaction would work via a QR Code on the back which links to the bitcoin deposit address you would like to use. Thus, you just stick the card in your wallet and then you can pay effortlessly with Bitcoin wherever you roam.

But, is it legit?

Well, you never know with McAfee.

He’s definitely a loose cannon with his Twitter announcements. Just a couple of weeks ago he announced he would reveal the identity of Sataoshi Nakamoto via a series of clues. This so far has not materialised into anything. This was just the latest in a long-line of hairbrained promises made via Twitter, which include an on-going promise to run for president in the 2020 election.

This is slightly different though as along with the Tweet, he provided a demo version of the card. Decorated with an American Flag backdrop with stripes containing broken chains, with the words “Freedom Lover” and his presidential slogan “Get Your Soul Back.” Complete with a picture of his face covering half of the card. The last feature he states though will be a limited-edition version, writing that, “Only the first 12,000 have my image on it. After that, all cards shipped will be plain. My haters will have to wait.”

While, of course, creating such an image would be no challenge in the photoshop, particularly for a man with as much time on his hands as McAfee. What would be the point though? He has enough followers and traction on Twitter as it is, so to keep making these things up like this would just damage his credibility.

Not to mention the fact that a bitcoin debit card is an awesome idea that would likely be a big hit, especially with his branding backing it up, and would be a massive step to implement bitcoin payments into day-to-day life. Thus, it would be a big money spinner and to announce it with no plans to pull through wouldn’t make much sense from a business standpoint.

However, this is John McAfee we are talking about. A man full of brains and ground-breaking ideas, but who duels this with an element of madness and unpredictability that means that no-one really knows what’s fact or fiction with the man.

With this mind, until I see one in real-life being use by a third-party outside of the McAfee circle, I won’t get my hopes up just yet.